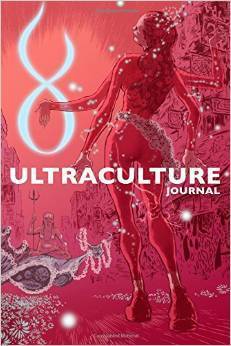 Originally published in 2007, Ultraculture Journal is a monster of a book. Clocking in at 404 pages, it’s a massive compendium and guide to Tantra—the ancient Hindu esoteric science of awakening consciousness. And we’re not talking New-Agey sexy-time here: We’re talking real Tantra, the province of a 10,000 year old tradition of dope-smoking, itinerant Sadhus who have wandered India since prehistory, relinquishing all worldly attachment and seeking only liberation from the world of illusion.

Among the contents of the massive book are multiple contributions from Genesis Breyer P-Orridge of Throbbing Gristle and Psychic TV; the late Jhonn Balance of Coil; William S. Burroughs’ mentor Brion Gysin; the beat legend Ira Cohen and many, many more luminaries of consciousness from both East and West.

This is the fully revised, definitive “director’s cut” of the book. It looks excellent, reads great and includes a new afterword from me putting the book in historical context as an important document in the cultural exchange between Eastern and Western religions.

Ultraculture Journal records the full range of the spiritual path: the transcendental highs, the soul-crushing darkness and lows, the brutal confusions between spiritual systems…
Here’s the back cover copy:

ON THE ACIDIC EDGE OF WESTERN AND EASTERN MAGICK

Ultraculture Journal collects under one cover some of the most volatile and direct tantric and magickal writing currently available in the English language—from the Thelemic and Chaos currents of the West to the Vedantic and Non-Dual mysticism of the East. It will change you at the cellular level; you have been forwarned. Just a few of the contents:

Beat legend Ira Cohen on John Dee and the Kumbh Mela, the biggest religious festival in the worldThe rantings of Ganesh Baba, the world’s most tripped-out tantric guruJason Louv’s essential guide to Western magickLalitanath and Shivanath on the Magick Path of TantraDave Lowe and Hans Plomp’s travels through India’s mountains and rivers without endTreasure chests full of rituals, reviews, wish-granting genies and more!