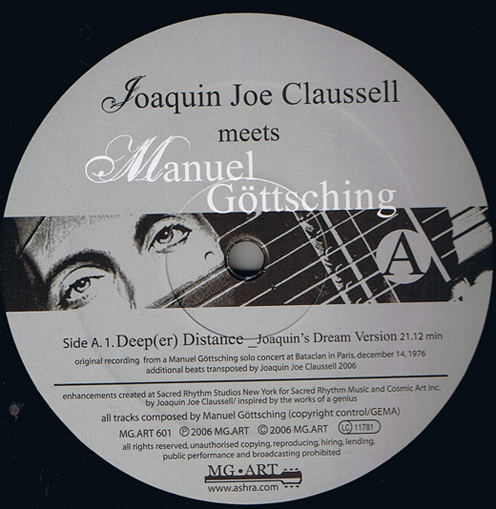 finally back in the very limited three track Vinyl pressing released on Manuel Göttsching´s own label MG.ART, with previously unissued tunes finally seeing the light of day.The 21 minute version of Manuel's previously unreleased Deep(er) distance is taken from a paris show sometime in 1976, opening with an awesome bass driven blissed out dream version before issuing forth into some blazing progged out soloing over 12 minutes in. Nice to hear Claussell heading away from the afro and deep into dub territory for this journey of a tune. Flip for a more discoid rework of "Ain't no time for tears" which adds organ , percussion, overdubs loops and effects for a true mancuso style track if ever there was one. Manuel takes control to close with a ten minute "Shuttlecock", an awesome cosmic jam. Details are scant at this moment, but we gather there's already future editions planned and in the can with some huge names, Carl Craig, Derrick May and more, with a projected e2e4 25th anniversary album which promises to be something special. Future vintage.