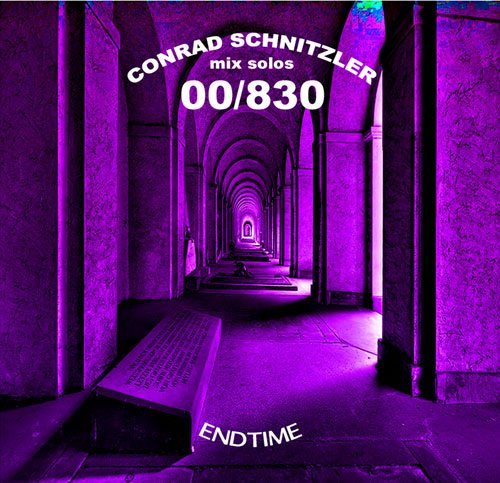 Conrad Schnitzler isn’t a household name, and in many ways, I’d consider him an outside artist. He was certainly never able to live large from the music he made and the ideas he developed, even though he had an enormous influence on the musicians and artists around him. I guess you could say that influencing your peers is one of the most important things you can do in his line of work—certainly more than making money. But artists shouldn’t have to worry about financial and bureaucratic bullshit. It’s not only boring; it’s also bad for your health. I think worrying about things like that is one of the reasons why people, and artists especially, die young. And saying great art is only made by those who suffer is complete bullshit. Schnitzler wasn’t really young anymore when he passed away last August, but he still should have lived much much longer.

He knew he didn’t have long to live, which is why he worked so hard to finish his last “album”, if you can call it that. It’s no secret that Schnitzler’s known for despising catchy melodies. The closest he ever came to making pop was in the early eighties when he released “Auf dem schwarzen Kanal”, which fit well to the whole punk and new wave thing in Germany at the time. But even that wasn’t the same as other pop music of the era. You could hum to “Los Niños Del Parque” by Liaisons Dangereuses and you could hum to DAF, but you couldn’t hum to Schnitzler. But you still wanted to listen to it again and again.

Schnitzler had an incredible archive of his music and he was adamant about putting all of his old cassette tapes onto CD-R. Most of these recordings—and there are hundreds, if not thousands—are a mix of various soundscapes and individual synth lines that sound distinctly like Schnitzler. The amazing thing was that he made these “raw” CD-Rs available to the public, with all these interesting little musical vignettes that sound sort of unfinished. You don’t even really know what’s on the CDs before you buy them—they’re usually not dated or explicitly labeled. Occasionally the disc will have a name, but you don’t know if you’re getting synth parts or drum parts or whatever. He liked the idea that people would have one-offs of his, and he also liked people mixing these various tracks together live, like a Schnitzler concert without the man himself, which happened quite often. It makes sense when you consider that Schnitzler was a student of Joseph Beuys and very into communication-related ideas of performance and recording, even though he often liked to work alone.

Endtime is like Schnitzler’s other self-released CD-Rs in that the tracks are short and, at first glance, you don’t really see a larger narrative. However, the album is made to be consumed as a whole, because the tracks do seamlessly float into each other. I know that he finished the album four days before he died when he already knew the end was coming. But it’s definitely not a bombastic epitaph, and it’s not depressing or euphoric or “transcendent”-sounding in any sense. Endtime retains the same sort of explorative character of Schnitzler’s other releases. The music is typically unpredictable—you really have no idea what’s coming next. Ultimately, it’s experimental electronics at its most explorative—within a musical cosmos that Schnitzler created for himself (Andreas Reihse)